July 31, 2019
Hi. I know it's been a while. I've been busy working on four projects of my own. I have four part-time jobs: game writer at StrideStar Studios, content writer and social media marketer for an indie blog, game writer at Atomedia47, and now I'm a coauthor to an upcoming fantasy novel. For the most part my jobs involve a lot of research and note taking. Last month I found out I had four things planned the week of my birthday. With that I decided to take a one week vacation starting the 15th. On the vacation I can still write, but no meetings with work, writing friends, ect. I haven't taken time off like this for months or maybe a year.
My vacation started Monday the 15th with me getting my nails done at a local salon nearby. My nails have lasted almost three weeks so far wothout so much as chipping. When I got home I found four birthday cards from family. I got birthday money just in time for the week. My mom gave me money for my birthday dinner, and my grandma gave me money to enjoy doing things in the city. She knows how expensive living in New York is. The 16th, I relaxed and made sure I had everything prepared for the next few busy days out. One of the things I prepared for the week was my 'on-the-go' notebook. I divided into five sections: three for Head Hunters' spinoffs, one for the project I'm working on with Adam, my coauthor, and one for my story Under the Lake (over a decade in the making 😅 ).
Wednesday was my birthday, so Joey made me breakfast. He made my favorite, pancakes and scrambled eggs. Eric, Richard, and I went to the city. We went to Book Off, a local book store. I found hard-to-find Pop Vinyls that I just had to buy. After that Richard surprised me with a great deal on tickets to the Ripley's Believe It or Not! museum. I had been watching a lot of the new Ripley's hosted by Bruce Campbell. It was awesome. Some of my favorite parts were the the skull armor, the finger neck (both worn by grieving wives), and a long, sleeveless dress made entirely of Twizzlers. I took a bunch of pictures though. Then we all met up and went to the Hard Rock Café. We got to eat in the New York room. We got in right before the rain started.
Dad gave me Yankees tickets for my birthday. The game was Thursday.  This was the second tickets he bought me for the season. I got to see more of the stadium on Thursday. Since the game was rained out on Wednesday I saw the last three innings of Wednesday's game. It was Yankees vs. the Tampa Bay Rays. Yankees won. It may sound weird but I love baseball, but I did write during the game. I enjoyed the game, but my ride showed up early before I could finish the game.
Friday was uneventful. But Saturday Richard and I went back to the city to meet one of my Accountabilibuddies (main writing friends) in person. Tiara also brought her man. It was one of the hottest days in New York, but we did our best to keep cool. We had lunch then went to the Amazon bookstore. We found some pretty good books like P is for Pterodactyl: The Worst Alphabet Book, Go the F*** to Sleep, All My Friends are Dead, ect. Apparently I HAVE to listen to Samuel L. Jackson read Go the F*** to Sleep. Tiara and I read P is for Pterodactyl and How to Traumatize Your Children. There are so many ways to traumatize your children.

From utero to adulthood. Richard also found How to be a Federal Criminal. For humor not legal advice.

Had to buy it. I'm on chapter three. Then Tiara and I wanted to check out the library. It's the fanciest library ever, but we got there by closing time. We backtracked to Panera and hung there. 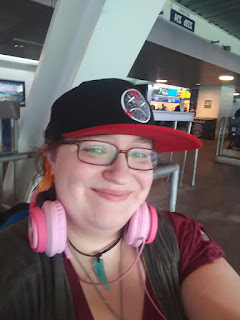 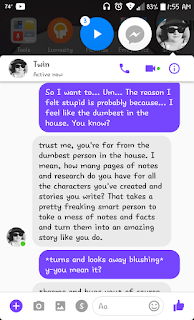 August 01, 2019
"I'm Kaylyn and I'm a serial writer..." I replied to a writing group I'm in, Writer's Warriors when I was asked by a daily question. The question was, "Introduce yourself and your WIP (work in progress)". Last month I told them all about Under the Lake (decade in the making) and Project Poseidon (the coauthoring project). But this month those two stories aren't on the forefront of my mind, so I'll be writing about Escort/Recon (a Head Hunters'  spinoff) and Heart on Her Sleeve (a redesign of an old idea). I got the idea of writing about this while writing the last piece. It was also inspired by talking to some of my conversations with friends.
Definition of serial: occurring in a series rather than simultaneously
I may not be using the word fully correct since I can work on two or three at a time, but I move on to the next ones rather quickly. As I mentioned in my last blog I set up my 'to go' notebook with five stories on my bir…
Read more